On Gifts, Friendship, and Love

Posted on December 20, 2014 by Phaedra Bonewits

I’m not going to say that it’s been a long time since blogged (although it has been more than two years) but let’s just say I almost couldn’t remember how to log in. For quite some time now I haven’t seemed to have the concentration to write. But one story has been on my mind a lot lately, so I feel I need to share while I can form the thoughts. 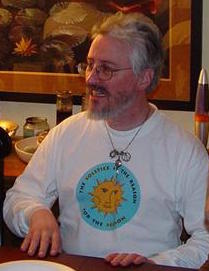 It’s sort of a Christmas story, my favorite happy/sad holiday memory from December 2009.

Isaac and I liked holidays. In October, we’d put up a little Halloween tree with wizard and witch ornaments, transition that to Thanksgiving-y harvest decorations & then on to Yule. We both had collections of holiday decorations formed over the decades, and we’d have fun putting up a little tree. He collected Santas, especially those that were more like the Ghost of Christmas Present or vaguely Druidic, green robed Father Christmases, or white-robed wizardly ones. I had holiday dishtowels, Twelve Days of Christmas drinking glasses, and tons of vintage cookie cutters. We took great pleasure in the festiveness, although it was always a little hard on me because I was working retail during most of our years together.

The holiday season in 2009 was different. Isaac had been diagnosed with cancer in early October. By December he was still getting chemo and radiation, both very hard on him. I was taking him to treatments and doctor’s appointments anywhere from once to three times in a day, five days a week. Weeks of radiation treatments were frying him from the inside out. The chemo had miserable side effects, usually at their worst during the middle two weeks of the month. At those times, he couldn’t do much beyond try to get comfy on the sofa, which wasn’t easy because of the radiation burns.

At the same time I was working the holiday season at the mall. I’d done it before, but this was maybe the second year when the mall decided it had to emulate the crazy extended hours that big box stores had adopted. As December progressed, it was required that our store to be open longer and longer, sometimes as crazy as eight in the morning until midnight. You might say, well, lots of stores stay open that long, and you’d be correct. You might say, so what’s the big deal? Well, our small store had a grand total of three employees all year round. The three of us had to cover all the store’s needs over those sixteen hours, while still accommodating days off (no overtime–that would cost the corporation money!). Sometimes, with commuting time figured in, an employee would have less than eight hours between the end of one shift and the start of the next. I know some employees at other stores would just sleep in their cars in the parking lot. Luckily, I lived close enough so I never had to resort to it.

Thus, that December a typical day for me was take Isaac to the radiologist first thing in the morning, get him home, maybe put on a crock pot, go to work, come home, often quite late, and then get up and do it all over again. As the mall began to open earlier and earlier, I’d drop him off at the radiologist’s, and he’d have to take a cab home (he couldn’t sit upright in the car, so his driving anywhere was out of the question). When I had my days off–always weekdays, of course, at that time of the year–I still had to get Isaac to multiple medical appointments. I hardly felt like I had days off at all.

(In addition, either of us had a clue that the whole time I was nursing Isaac through his cancer, I had cancer myself, second or third stage non-Hodgkin’s lymphoma. Two and a half years later, I’d finally be diagnosed when it reached fourth stage. No wonder I was tired!)

By mid December, I was exhausted, mentally and physically. I had no holiday spirit whatsoever. Nothing. Nada. Zilch. I was a bitter, hollow-eyed shell, hating what the so-called festive season was putting me through. One day I came home from work and told Isaac, “The only thing Christmas means to me is that I’ll get a day off.” And I absolutely meant it.

Days later, the Hermes Council, Isaac’s men’s group of some twenty years, was scheduled to meet. (You can read all about the Hermes Council in his book The Pagan Man .) The guys were going to meet at our apartment, small and cramped and chaotic as it was, because he really didn’t have the strength to go anywhere else. Women weren’t allowed at Hermes Council, but that didn’t matter because of course I was working.

When I got off of work the night of the meeting, I hoped I wasn’t getting home too early. The Hermes Council was very special to its members and I didn’t want to disrupt their time together. But I was really to exhausted to head anywhere else. I decided when I got home I would go hide in the bedroom and hope they’d overlook the intrusion.

As I feared, when I first opened the door I saw the Council members were still there. But the second thing I saw made me stop dead in my tracks. A Christmas tree. Lights strung around the room. Garlands on the bookcases and over our computer desks. Isaac’s favorite Father Christmas ornaments and figures on display.

I did the only thing a reasonable, exhausted person could do. I burst into tears. I just stood in the entrance way, crying. Partly from happiness, partly from relief, partly from gratitude.

Our friend Vann came over and gave me a big hug. “I hate all this Christmas stuff,” he told me, “but seeing what it means to you makes it worth it.” So of course, I cried even more.

That night was the brightest spot of a miserable season. I thought I would burst from gratitude. I love those guys to this day, each and every one.

That Christmas of 2009 was the last holiday season Isaac and I had together. He passed the following August. I haven’t really done much fussing for the holidays since then. Partly because after you lose someone, holidays seem off. Partly because in the course of moving, almost all of those treasured holiday decorations got left in New York. (Long story, that.) Mostly I just haven’t had the heart to bother. I helped hang a few ornaments on my friends’ tree in North Carolina, but I felt disassociated from it. Living alone the last couple of years, I really haven’t done anything at all except to put on display the cards I received. It all seemed too much, too ephemeral, too stressful.

This year, I was invited to a tree-trimming party by a local Pagan group in Oregon, where I now live. As I hung an ornament or two on the tree, all the memories of that night, almost to the day five years earlier, came rushing in. I had to leave the room to shed a few tears. But I was able to go back and hang a few more.

Now I’m in the suburbs of Chicago getting ready to celebrate Christmas with my family for the first time in about 15 years. (When you work retail, holiday travel is next to impossible.) Last night I helped my sister and her family decorate a tree with all the ornaments they’ve collected over the decades. I could relax and enjoy it in a way I haven’t done for many years. I’m grateful for that.

I’m also grateful, and always will be, to the Hermes Council for their gift in 2009. Hey, I miss you guys! I want you to know how much that simple act meant to me. I’ll never forget it, or you.

Nope, no bah, humbugs from me. Merry Christmas, if that’s your thing. Happy Yule, Blessed Diwali, Happy Kwanza, Happy Hanukkah, Happy New Year, Happy Whatever Winter Holiday of Your Choice. Bring back the Sun with love and laughter, and do what you can to make someone else’s holiday bright. I think Isaac would agree with that.