On Henna Hands and True Will

Over the weekend, I went to the Shakori Hlls Grassroots Festival to hang out with my friend Lisa F., one of the dear of folks who at great inconvenience to herself helped me pack up and move house from New York to North Carolina. She does facepainting at events, so I was able to hang out at her booth, people watching and listening to some great music. 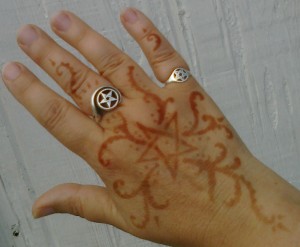 On Saturday morning, Sam, the henna artist working with Lisa, did a henna tattoo for me. I chose the design and the placement on my right hand as a magical act to help me focus on some project that need completion. I won’t be able to look down at my right hand without remembering I have the power to create.

As Sam worked, I told him I could never do henna art because my hands aren’t that steady. He looked at me for a long moment. “My hands aren’t steady,” he said. “You just have to understand your shake.”

Just last week as I was commenting on T. Thorn Coyle’s blog post about desire and will, I was musing on the idea of True Will. True Will, as I was taught and have grown to understand, is knowing not just what you want, but the tools that are at your disposal that would enable you to get it.

I have to understand not just what I desire, but what talents and abilities–and limitiations–I have to bring to the realization of that desire. For example, I could desire to become a prima ballerina, not with some neighborhood storefront, but with a world-class company with which I would be able to dance feature roles with amazing partners. It’s a nice dream. However, I’m fifty-nine years old, and have no background in dance, much less ballet. Thus, no amount of application and practice, no matter how much sheer will I bring to the effort, is going to make that happen.

But let’s say, by some freakish stroke of fortune, I discover that in spite of years of ignorant neglect, I have a true ability to dance. And I find with application of will and lots of hard work, I am approaching a prima ballerina level of artistry. I’d still have to face that I will never be a prima ballerina. Why? ‘Cause there’s not a dance company on the planet that’s gonna hire and feature a ballerina in her sixities. Ain’t gonna happen.

In order to be acting in accordance with my True Will, my goals should take in my talents, my limitations, and the world in which I live. In that world, 60ish-year-old ballerinas are gracefully retiring from Prima roles, not beginning to dance them.

Does this mean I should not try to dance, or to become the best dancer I could be? Not necessarily. If I love it, and can do it (the latter in my case being questionable) I could profitably pursue it. But my final goal should be more realistic than Prima Ballerina.

I gotta understand my shake. Then I’m doing my True Will.