Had an amazing time in Florida at the FPG-Beltane last weekend. My thanks to the organizers and attendees.

I have to say, the facilities there are impressive. I’m not a great camper any more, between the lingering effects of my long-ago back injury and my cranky hip joints. The FPG folks provided me with not just a real bed (which all the headliners get) but some extra padding, too. It’s that thoughtfulness that makes the difference.

I was privileged to share the presenter’s cabin with several terrific folks. One was old friend Kirk Thomas, current ArchDruid of ADF. Kirk is an great guy, and provided real spiritual comfort for Isaac and I during Isaac’s last months. Two local ADF groups, Osprey Suncoast Protogrove and Dark Waters Protogrove, presented the opening and main rituals, with Kirk playing a big part in both. He is one impressive ritualist. I had a small part in the main ritual myself, and was honored to be asked to mention Isaac’s name in the calling to the Ancestors. Even if you’re not sure if Druidism is your path, if there is an ADF grove in your vicinity, check them out. ADF folks are fine ritualists and present public worship for all the holidays.

Although this was my first trip to a Florida Pagan Gathering, Isaac had been to FPG a number of times. People had such good memories of him, it really made me proud. They renamed one of their workshop spaces in his honor, too: “Isaac’s Isle.” It was a very touching dedication. I cried. It’s good to know he will be remembered in so many places.

Also headlining was Patrick McCollum, who I had met many years ago but haven’t ever really had a chance to hang out with before. The journey this guy has been on for the past several years is unbelievable. Imagine things like hanging out with the Dalai Lama, giving a speech on world peace that was broadcast to the International Space Station, and being given the Buddhist name, in Thailand, of Sheida Garypo, the King of Peace. Patrick has spent decades dedicated to service to our community with projects like the Pentacle Quest and Pagan prison ministry, and now the world is noticing. When the world notices, it’s like a snowball rolling. Next he’s headed to Nepal, and then Siberia, all in the name of religious diversity and world peace. And a nicer, more down-to-earth, humble guy you could not find. If the Gods present him with these opportunities, he’s gonna take ’em. I like that. Oh, of course, punctuating all these mega events are “little” ones like FPG and PSG. ‘Cause he’s one of ours, folks.

Also sharing our digs was Aaron Leitch. I hadn’t been familiar with his work before, but am delighted to be so now. His specialty is grimoire magic. Those of you who have known me for a long time know my initial background was as a magician, not a Witch or Druid. There are some in the community who would discount occultism as irrelevant to modern Neopagans (is that redundant?), but friends, we would not be where we are today without the foundation of the Western magical tradition. Plus Aaron did some danged fine workshops. (I will admit I am hesitant to look over his material on the proper pronunciation of Enochian, lest I find I’ve been bungling it all these years. That would be painful to know. For now I’ll stick to ignorant bliss.)

I presented three workshops, Ritual Participation Skills, Real Energy, and a new one on the use of Sound in Magic. The Real Energy workshop on Friday was very well attended and well received. If you missed it (of course most of you did) I am doing it later this month, Saturday, May 21, at Truely Unique in Wilson, NC. (If you want me to present it at your event, I can be had 🙂

In one of those wonderful, synchronistic events that can happen at festivals, I was also able to connect up with an old friend. 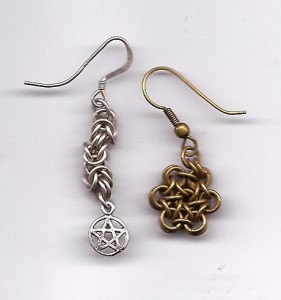 Enchanted Chains jewelry from my personal collection, the earring on the left from 2011, the one on the right from 1994.

Back in the 1990s, I ran Explorations, an occult shop in Peoria, IL, right around the corner from Bradley University. I met many lovely people there, including one young Bradley student who made chain mail jewelry we used to sell in the shop. After Melissa graduated and moved to Kansas City, we visited back and forth. I worked a Ren Faire booth with her more than once. But as life happens, we lost touch. Still, every time I’d see chain mail, I’d tell folks about this nice chain mail artist I used to know. Imagine how I felt when I wandered into the Enchanted Chains booth and saw Melissa standing there! We were both thrilled. (She hadn’t been entirely sure if the “Phaedra Bonewits” in the program was her Phaedra 🙂 Who knows, maybe I’ll wind up in costume again somewhere.

Each of the beautiful Florida nights was capped off with a fine bonfire and drum circle. I’ve been going to bonfires for many a year, but since I hurt my back in ’98, I’ve seldom done more than a token circuit or three around the perimeter. Now my back’s a bit better, but I have felt all too aware of being older, grayer, and heavier than I was the first time I danced a fire. But at Patrick’s urging, I gave it a go once again. What the heck, it’s Beltane, right? And you know, it felt pretty darn good. Besides, if us old-timers don’t set the example, what can we expect from them young ‘uns?

Did I mention I had a lot of great mead?