Along with many millions of others, I’m celebrating Al Gore’s winning of the Noble Peace Prize today. He shares it with the United Nations’ Intergovernmental Panel on Climate Change. Here’s what he said today:

I am deeply honored to receive the Nobel Peace Prize. This award is even more meaningful because I have the honor of sharing it with the Intergovernmental Panel on Climate Change–the world’s pre-eminent scientific body devoted to improving our understanding of the climate crisis–a group whose members have worked tirelessly and selflessly for many years. We face a true planetary emergency. The climate crisis is not a political issue, it is a moral and spiritual challenge to all of humanity. It is also our greatest opportunity to lift global consciousness to a higher level.

My wife, Tipper, and I will donate 100 percent of the proceeds of the award to the Alliance for Climate Protection, a bipartisan non-profit organization that is devoted to changing public opinion in the U.S. and around the world about the urgency of solving the climate crisis.

Now it’s time for Neopagans, New Agers, and others concerned about the fate of Our Holy Mother Earth to take action.

The climate change scientists were wrong about global warming—the situation is even worse than we thought, as the following chart makes clear: 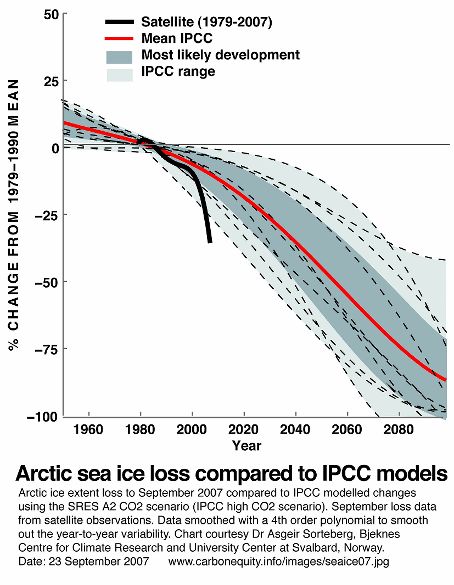 The black line in the chart shows the results of actual ice measurements as distinct from the published predictions.

As a Druid and as a priest of the Earth Mother I know how important it is to use both magical and mundane methods to draft Al Gore, kicking and screaming if necessary, to run. There is no other position from which he could have the power and influence he will need to push major American corporations, our national and state governments, and other nations of the world to take the drastic action that will be needed to avert the worst of the already tipped-over climate.

In the days to come, Mr. Gore will be deciding whether or not to jump into the race for the U.S. Presidency. We can help him make that decision.

On a mundane level of reality, we can all go over to DraftGore.com and sign their petition to him—over 186,000 people from around the world, Democrats, Greens, Independents, and even Republicans have already done so. We can donate money to the Draft Gore Campaign through ActBlue and/or PayPal. We can sign-up for their email list and join our local Draft Gore groups, and pledge money to support Gore as soon as he commits.

On a magical/spiritual level of reality, we can use the energy of the New Moon over the next two weeks to bless Al Gore with courage and to open his heart to Gaia’s call. I would like all of us to invoke Her every night from now until the Full Moon, asking Her to speak to him and tell him how much pain She and Her children are in, and using our magics every night, to gather up and send to him the rising storm of people crying to him in America and around the world,

Yes, he can still decide not to. We won’t force him to do anything. But I don’t think he will refrain from taking the challenge and making the sacrifice the Earth, and the rest of us, need him to.

World famous (or is that notorious) Druid/Wiccan/Heathen/Santarian author, speaker, pundit, etc. Google me to see what I've been doing with my life and what my friends and enemies think about me.
View all posts by Isaac Bonewits →
This entry was posted in Current Events, Environment, Magic, Politics. Bookmark the permalink.

9 Responses to A Spell for Democracy: Run, Al, Run!