One of the rituals I wrote for The Pagan Man is called â€œThe Dagdaâ€™s Shield.â€ This is a visualization exercise to be done every day for psychic, spiritual, and magical protection:

The Shield of the Dagda

I bind unto myself today, the strong name of the Dagda,
By invocation of the same, the Three in One, the One in Three.
I call this day to me forever, the Dagdaâ€™s many arts:
His mounting of the River Women, his siring of the God of Love
His fury on the field of battle, His druidry so strong
His majesty as High King, His sympathy for the despised.

I bind unto myself today, the Good Godâ€™s mighty seed
His eye to watch, His might to stay, His ear to harken to my need
His wit to teach, His hand to guide, His shield to ward
His fire to enflame my speech, His mighty club to be my guard.

I bind unto myself the name, the strong name of the Dagda,
By invocation of the same, the Three in One, and One in Three,
The mightiest of all the Gods, Father of the Queen of Arts,
The Supreme Knower, Lord of Fire, and King of Druids.

Celtic scholars will recognize this as being based on the so-called â€œShield of St. Patrick.â€ It seemed obvious to me that the magical exercise credited to the missionary had originally been a Pagan one, and that the Dagda was the obvious candidate for the triple-deity involved.

I was also inspired to create this graphic as a visualization aid (six of them would more or less cover a sphere of energy on all sides), using symbols associated with the Dagda and Druidry: 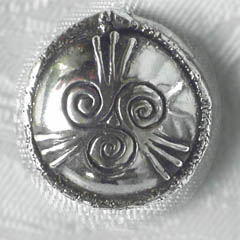 This is now available as a silver pendant by Merlin of Amulets by Merlin. The price is $US20.00 (postpaid) each and they can be ordered via Our Blatant Hucksterism Page.

I will probably also turn it into t-shirts, mugs, etc., if interest develops.

By the way, if youâ€™ve been slow to buy any of my talisman designs because of the price, weâ€™ve lowered all the prices to $US20.00 each (or $US12 each for wholesale orders).

World famous (or is that notorious) Druid/Wiccan/Heathen/Santarian author, speaker, pundit, etc. Google me to see what I've been doing with my life and what my friends and enemies think about me.
View all posts by Isaac Bonewits →
This entry was posted in Magic, Pagan Stuff, Products, The Gods. Bookmark the permalink.